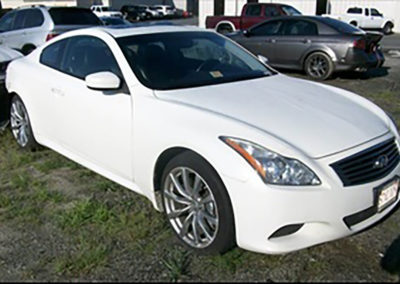 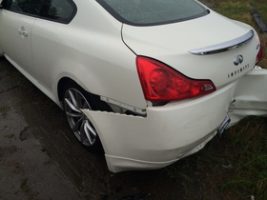 I was rear-ended in my 2008 Infiniti G37 on July 23, 2014. This was the first time I was ever hit so I was pretty new to the Insurance process. A couple weeks after the accident A buddy of mine told me to make sure I ask the at fault party for Diminished Value. I Had asked my lawyer about it and she told me they don’t handle DV claims, that I would have to go to an outside appraiser and pay for it myself then submit to the Insurance Company and even then she wouldn’t think it would be worth my time because I have an “older” car with 87,000 miles. That being said I decided to pursue the DV claim anyway and researched and talked to what seemed like 100 Appraisers after I decided to give the Auto Mediator my business.

From the minute I talked to Steve at the Auto Mediator I had a great feeling about him and he talked me through every step of the initial process and was very patient with me. Steve Then prepared my DV claim (which was about 40 pages and extremely detailed) which I sent over to the insurance company around Mid-August. I had gone about a month without hearing anything when I got an e-mail from Steve asking how things were going. I told him I was very frustrated and he told me not to worry, we would just have to file a complaint with the Virginia Insurance Board and that will get the insurance companies attention. He walked me through that process as well and about 2 weeks later the adjuster contacted me.

Their first offer was a low-ball but Steve had prepared me for how to handle negotiations with them. After about a day and a half of negotiating I settled for $7,833!! This after being told by many other people (including the insurance company) that I didn’t have a strong claim because of the age and mileage on my car. I would strongly recommend the Auto Mediator to whomever is seeking help with a DV claim. Not only is he the best at what he does but he is invested in your case from start to finish. THANK YOU AUTO MEDIATOR! Joseph M.- Spotsylvania, VA

Get YOUR REPORT NOW